Final preparations are taking place aboard a beloved Duluth ship ahead of its final journey across the Great Lakes.

The U.S. Coast Guard Cutter Alder is preparing to leave the Duluth-Superior port Wednesday after nearly two decades of service.

A small ceremony was held for the ship on Monday, with a visit from U.S. Senator Amy Klobuchar, who thanked the crew for their hard work and advocated for the importance of the shipping industry in the Northland.

“You cannot have strong commerce and a strong economy in Northern Minnesota without a strong port and without the ice breaking,” Klobuchar said.

The Alder has been breaking ice and serving as an aid to navigation on Lake Superior for almost 17 years. 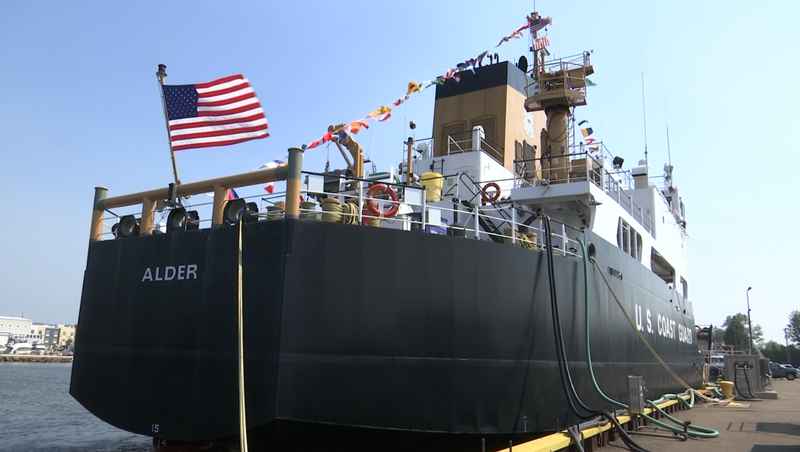 Now, it is being sent to Baltimore for a year of maintenance and repair, followed by a new assignment in San Francisco.

“They are taking it for a mid-life overhaul to update a lot of systems on the ship and make those that were or were not there a little bit better by redesigning a few things,” Joel Wright, Commanding Officer for the Alder said.

Once maintenance is complete, the hope is that the Alder will continue serving as an aid to navigation in warmer waters.

“In San Francisco, there is not very much ice, so she will not be ice breaking out there,” Wright said. “She will be conducting aids to navigation in San Francisco and on the West Coast when she’s out there in hopefully one year though.”

The Alder will be replaced by the U.S. Coast Guard Cutter Spar in late February or early March of 2022. That ship is named after the Coast Guard Women’s Reserve, better known as ‘the Spars.’

The U.S. Coast Guard was not able to provide the exact time the Alder will depart Duluth on Wednesday, but they did say it would be in the morning.