Signups were through the Minnesota Ultimate website. From there, teams were put together based on the players’ estimated skill level.

“Those of us that run the league then put together teams based on what skill levels they said they were to try to make teams as even as humanly possible,” explained Duluth Ultimate Committee Member Ann Farley.

Participants found out what team they are on the day before the first games. None of the three teams had a team name or practiced beforehand.

“This is the first one, so we’ve just shown up and figured it out as we go,” said participant Brett Sullivan. “We met each other like twenty minutes ago, so we’re still learning names and stuff.” 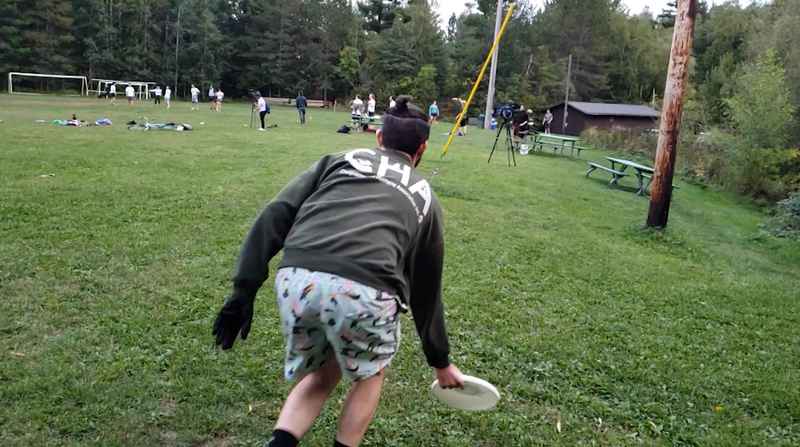 A new Ultimate Frisbee league has taken off at Duluth's Chester Park.[WDIO/Sabrina Ullman]

While anyone over the age of 18 can play and experience is not required, this sport does require a significant amount of exercise. Despite being a non-contact sport, injuries can occur.

“I wouldn’t suggest going from not running at all to trying ultimate because you will probably get hurt,” explained Farley. “A lot of running is involved. We figured out that in about an hour of play, people typically run about five miles. We’ve tracked it with Fitbits and stuff before.”

Ultimate Frisbee is played on a field similar in size to a football or soccer field. Every point begins with the two teams on opposite sides of the field.

To initiate the point, the team on defense “pulls” by throwing the disc to the other end of the field. From there, the team on offense tries to make their way to the end zone, similar to football.

“On the field, there’s usually three people handling,” Farley said. “So their job is to basically swing the disc back and forth across the field to create space. Then the cutters, their job is to then cut in towards the Frisbee to then move it down the field to hopefully score in the end zone”
If the disc touches the ground or is caught by defense, there is a turnover, and the other team gains possession. While many teams have set handlers and cutters, the teams in fall league are more flexible.

“We change positions throughout the field depending on who’s here and what they want to work on,” said Farley. “These leagues are really meant to encourage learning and people to feel free to play whatever position they want.”

Different offensive strategies are taught throughout the season as players improve and get more used to the rules of the game.

“Generally, we start with vertical stack because it’s the easiest one for a new player to understand,” Farley elaborated. “Throughout the season, we try to teach vert stack, horizontal stack, and then there’s another type of offense and defense called zone which is the most challenging to teach, so we usually teach that one when we have the most number of experienced players there so that we can help out the new people to kind of fill in the gap.”

A noticeable feature of ultimate Frisbee is that it is a self-officiated sport. Some higher-level leagues have officials who decide if there is a disputed call, but there is no referee making calls. If someone is fouled or if a player steps out of bounds with the disc, it is up to those on the field to make the call. Part of why this sport is able to be played without a referee is because of “Spirit of the Game,” a value well-known within the ultimate community.

“Spirit of the Game is basically that everyone wants to play and have fun and not get on each other’s nerves,” Farley explained. “If there’s a call, it’s up to those two players that were involved in the call to decide what the outcome will be. With ultimate, it’s all about having fun and being with your friends, and no one wants to get mad about a silly call. So you just want to be nice and move on as much as possible.”

The Duluth Fall Frisbee League runs every Monday night until it concludes on October 25th. All games are at the recently renovated Chester Bowl because it has lights.

There is a fall league every year, as well as a summer one. While it is too late to signup for this year’s fall league, ultimate players play pickup on Wednesdays and Sundays with no prior registration required. More information about the Duluth Ultimate community and how to get involved can be found on their Facebook page.