Folks at Carlton high school walked to remember those lost to suicide and to spread awareness.
Saturday marked the 13th year the community has come together for the walk.

Co-organizer Meghann Levitt says the first walk had almost 100 people and that it’s continued to grow and grow since. She says, “obviously this year is a little different cause we are still in the midst of COVID but [we had] a great turn out this year."

She enjoys seeing everyone again for another year saying, "It makes me feel really good because it’s an opportunity for those who have lost friends and family members to get some fellowship and understanding from those who have been in a similar situation."

With last year’s walk being virtual because of COVID, the community is glad to support each other in person. Speaker of the event Jessica Laney says, “It’s so nice. It’s just not the same virtually and it’s hard to connect with people that way at the same level. And when you’ve got something that’s this emotional and this impactful for people it’s really nice to be back together.”

Co-organizer Jo Angell feels that it is a blessing to have everyone back together saying, “that just speaks volumes to the need that’s out there." 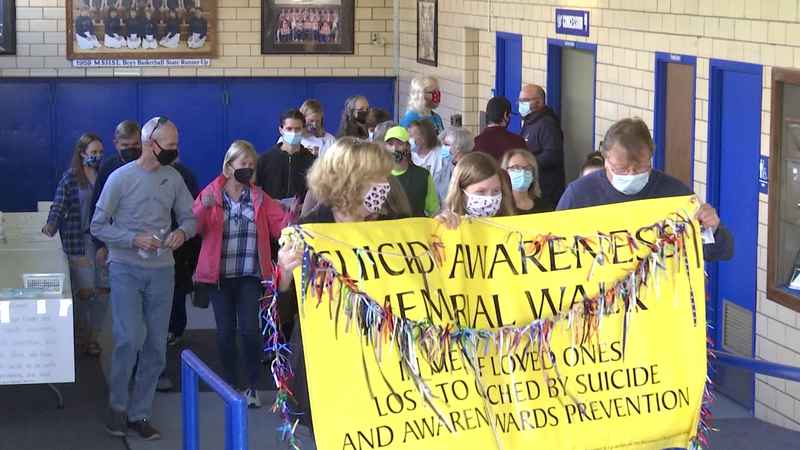 Along with the walk a moment of silence, the names of those lost read aloud, and a very special addition to the poster at the front of the line. Levitt says, "So they are able to tie a ribbon on [the poster] so we are able to remember that person along with us on the walk."

And while it’s nice to come together, the mission to prevent suicide still remains. "It’s still as urgent as ever. Our rates statewide were actually lower in 2020 than they were in 2019, however we still have a long ways to come as far as prevention as well. So this is just one of those ways that we can help get resources in the hands of people who either need them or can pass them on to others who might be in crisis”, says Levitt.